What followed was $500,000 + destruction, at speed exceeding twice the posted 45 MPH. Driven in an industrial / office complex, the street legal race car - his buddy Roger at the wheel - left the road, and wrapped itself around a tree.

It takes money to own, and to race, a super car - like a Porsche Carrera GT, that took Paul's life. It takes no money, however, to own a super web application - like a Blogger blog.

One of the problems with Blogger blogs is that - unlike a super car (a toy for the very rich) - they can be owned by anybody.

Blogger dashboard utilities are considerably simpler than they could be.

The simple controls, in the Blogger dashboard, will fool people. Many blog owners, with no technical skill level, are convinced that owning and operating a Blogger blog actually is a kindergarten level activity.

Using the dashboard, the blog owner will not worry, until a problem occurs.

Happily enjoying the simple controls, a blog owner will cruise along, publishing and tweaking, oblivious to the unseen complexities of the Internet support infrastructure. Eventually, they will encounter an obstacle (similar to a beer can or coyote, in the road); and losing control, come to a sudden and deadly halt.

When it crashes, a blog won't do $500,000 + in damages - but from the way some blog owners react, you'd think they were seeing twice that. Blogs will crash and burn, when people, using their own computers, try to maintain and surf them.

Blogger blog owners have many petty details to endure.

Blogger blog owners are subject to many petty details, which make many owners complain. One such detail would be the mysterious third party cookie requirement, which enables various Blogger features.

Trying to explain to some blog owners that their computers need to allow third party cookies, if they wish for Blogger to ignore their pageviews - or possibly, to allow their readers to comment - causes anger. Probably more anger, than a police officer might have received, had he interrupted the "diagnostic" session, in Santa Clarita.

But seeing Walker in the car, he would probably have simply asked for an autograph, and waved them on with a warning.

Instead - well, you see what happened. 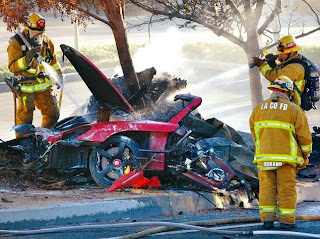 Unfortunately, for many blog owners, some Blogger features require advanced skill level, such as ability to tune filters and allow cookies - and to read instructions. Dealing with the problems is a lot easier with patience, and understanding - not blaming the people who try to help.

Some tasks will require reading, of instructions written in Adult English - not Kindergarten.

I am technically illiterate - please write instructions in words that use one syllable, no technobabble.

Please, help the helpers - don't demand that they re write their instructions, to suit you. The helpers want to help you - help them to help you.


Many blog owners are convinced that operating (publishing) a #Blogger blog is a kindergarten level activity - and they happily publish until they run into a more advanced level problem. Then, they crash and burn.