By Nitecruzr June 08, 2006
Having written about my early memories of shopping in Richmond, Virginia, I was saddened to read the news from a fellow Blogger and Richmond resident:

...Miller & Rhoads and Thalheimers are alas, no more. Both went out of business and their buildings are slated to be torn down in some downtown renovation. 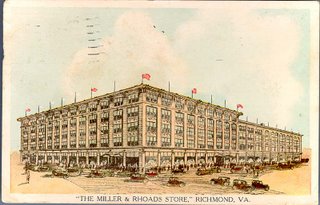 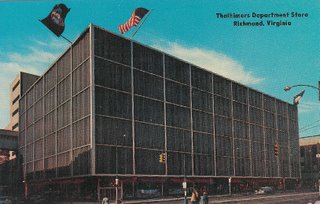 
K-Mart, on the other hand, however questionable their service, is still with us. And K-Mart is getting bigger, having recently bought out Sears / Roebuck (aka Sears).

So many Bloggers are thinking about moving to alternate blog hosts, like Wordpress. Well, The Real Blogger Status is being mirrored there, this week. But do I expect that to be a long term solution? Regretfully, no.

K-Mart, though known for providing less customer support, outlasted both Miller & Rhoads and Thalheimers. And engulfed Sears / Roebuck, which was a mail order giant from years back.

I have no doubt that Blogger will continue to expand, even as some Bloggers move to Wordpress. And one day, Wordpress will be engulfed too. Those of you fleeing Blogger for greener pastures may not be away for very long.