By Nitecruzr January 26, 2016
Some blog owners delete or rename a blog, without proper planning - and later regret their action.

Some spammers track blog name availability - particularly with blog names that contain "English" (and some non English) language words. If a spammer discovers that a given blog name has recently become available, he will publish a stub blog to that name - and later, add spammy content.

Why is a spammer interested in recently available names?

A previously unavailable name, now available, has residual value - because it previously had content, and presumably, readers.

If a valuable blog name is made available by the owner, a spammer will take it.

If a blog owner just abandoned a valuable blog name, by deleting or renaming the blog, a spammer is going to make good use of it.

The unwary blog owner will soon get complaints, from former subscribers.

Shortly, the unwary blog owner will see that his blog, recently deleted or renamed, has been re published and is now full of spam. His former readers are now asking why he is filling up their blog feeds with spam. And he has lost control of the blog, that once was his.

Unfortunately, by the time the republished blog name is discovered, the spammer has taken legal control - and is now the rightful owner. And, short of deleting the blog as a TOS violation, Blogger will recognise the spammers right to own a blog that was legally obtained, using a spammer version of "Create blog".

If the unwary blog owner is you, you may be able to correct your mistake.

If a deleted or renamed blog used FeedBurner to distribute a blog feed, it's possible that the remaining readers are subscribed to the FeedBurner feed. This is where you - the formerly unwary blog owner - can correct your mistake.

Then add a post, explaining what you did - and why the people reading the new blog (your new stub blog) are (or just previously were) seeing spam, in their bloglists and Reading List.

Edit the FeedBurner feed, to point to the feed from the stub blog. 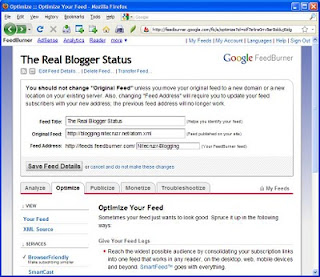 The current FeedBurner feed, for
The Real Blogger Status, is
http://feeds.feedburner.com /Nitecruzr-Blogging

Publish a post or two, as an apology to your former subscribers.

With your FeedBurner feed now re publishing your new stub blog, publish a post or two explaining what you did. Hopefully, given a couple posts from your (reclaimed) feed that do not contain spam, your former readers may read one of your new posts, and be enlightened.

And the spammer will be none the wiser - until the people who are paying him report that his former spam channel has stopped producing traffic to their website.

If you unwisely delete or rename a #Blogger blog, the name that was once yours will have some value to a spammer. If a spammer takes the abandoned blog name, publishes his own spammy content, and distributes it to you former readers, you will be powerless to do anything.