By Nitecruzr October 17, 2011
In October of this year, Blogger made a major change to the display of images and photos, in our blog posts. As we've seen a few times, this change was not provided as an option - and was not received graciously by all blog owners. After receiving a significant amount of complaints, Blogger removed Lightbox from our blogs image display.

Last week, having redesigned the Lightbox feature, Blogger released it for a second attempt.

Thanks to your feedback, we turned Lightbox off temporarily, and we’re re-launching it today with the option to disable it, along with a handful of fixes to bugs that you reported.

As with any Blogger feature, it now deserves a closer look. 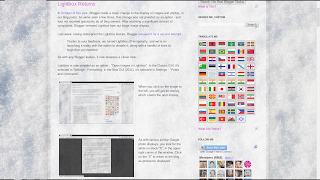 When you click on the image to the left, you will get an overlay, which covers the post display. 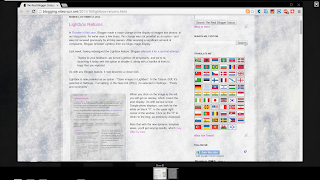 As with various similar Google photo displays, you look for the white on black "X", in the upper right corner of the window. Click on the "X" to return to the blog, as previously displayed.
Blogger has stated that the setting enables or disables it for the entire blog.

we've also created an option to disable it per blog