One of the less socially responsible behaviour of Google+ members is to share and re share various Google+ stream posts, without reading the content of the posts - simply to increase personal reputation in Google+.

Almost every Google+ member re shares some posts, without previosly reading the content or clicking on the links. If you curate posts into Collections, this will be normal. Curate first, read later.

Unfortunately, some people will re share constantly, without reading anything, ever - and this is where the Google+ Share counter problem started.

The purpose of Google+ is to create a community of people who would share and re share interesting content with each other - and participate in commenting and reading of content. The Google+ Share counter did not always encourage this intended community, because too many members only want to boost their personal reputation, without actually participating.

Some blogs may attract this abusive activity. Their community will be mostly Google+ members who will consistently re share everything that appears in their stream, simply to give themselves lots of post count, and reputation. They may similarly "+1" everything that appears in their streams, in hopes that their followers would do the same with their shares and reshares - again, to increase their personal reputation.

Irresponsible sharing, resharing, and "+1" activity would make the share counter for some blogs climb dramatically - even while the blog / post pageview count remained low. Some blog owners might misread the counter - and concentrate their blog publicity activity in Google+, while neglecting other more productive publicity - and wonder why their blog has no followers, readers, or subscribers.

All of this activity would leave some people with no motivation to actually read any published posts and comments - and further contribute to the gap between the pageview counters, and the Share counter. 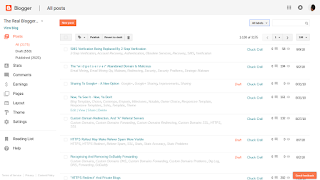 There is no Google+ Share counter in the dashboard Posts page, any more.


In one of the recent versions of Google+, the Share counter was redesigned - and Blogger removed the counter from the dashboard Posts page.

Unfortunately, too many Google+ members use Google+ simply to boost personal popularity, by irresponsibly sharing, re sharing, and "+1" - without actually discussing, following, or reading shared content. The Share counter would climb rapidly, without any actual blog content being read. Blog owners were confused by the difference in the Share counter, and actual blog activity.