By Nitecruzr May 25, 2016
The "Featured Post" gadget is a useful tool, for spotlighting individual posts.

One of the limitations of the gadget is that it, like many (though not all) Blogger supplied gadgets, allows only one copy on the blog, at any time. The gadget is, after all, called "Featured Post" - not "Featured Posts". Blogger does not give us the ability to feature multiple posts, simultaneously.

Given a little imagination, we can make the gadget work, for multiple posts. We can't feature multiple posts, simultaneously - but we can alternate featured posts, sequentially.

Combining the "Featured Post" gadget and labels, we can alternately feature multiple posts, in a daily or weekly sequence.

I added a label in this blog, "Featured Posts".

I identified a couple dozen posts, in this blog, which need to be featured - and gave each post the label "Featured Posts". My intention, once the Blogger Followers gadget rewrite effort is behind us, is to feature one different post in "Featured Posts", each day. 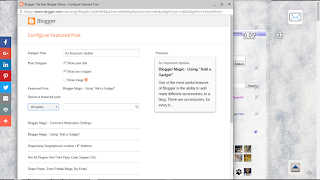 The "Featured Post" gadget is at the top of my blog. 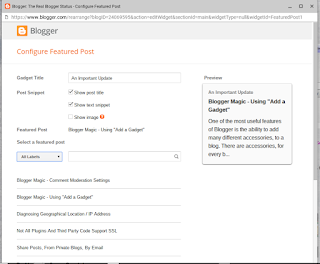 I can edit the gadget, and open the label list. 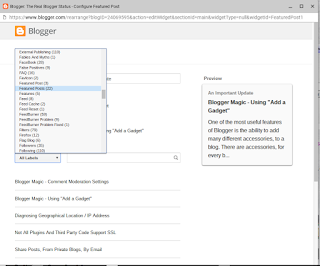 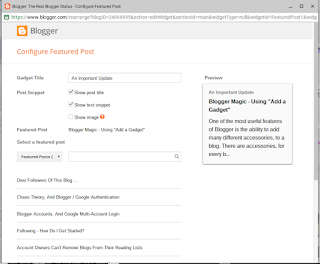 That gives me a list of my posts, with the "Featured Posts" label. 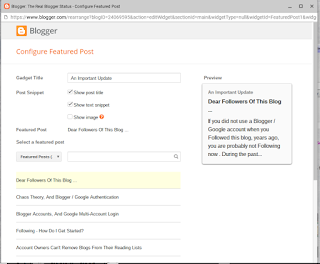 And, I selected the currently featured post, "Dear Followers Of This Blog".

With a little planning, though, you can organise the posts to be featured - and change the gadget, daily or weekly.