By Nitecruzr November 23, 2014
Occasionally, we have a blog owner trying to enable commenting, on a blog - and being unsuccessful diagnosing commenting problems.

Checking the per blog comment settings, in the the dashboard menu under Settings - Posts and comments, there's no obvious problem. The problem, in some cases, is in the per post settings, in the Post Editor "Post settings - Options" wizard - but not all posts will have a problem.

The "Reader comments" setting, for any new post, is taken from the setting for the previously published post. If you publish a post today, with "Reader comments" selected as "Don't allow", the next post will also be set to "Don't allow" - unless you change the setting, before publishing. Similarly, if it's set to "Allow", the next post published will have it set to "Allow".That's the choices, for each new post.

Since the per post setting overrides the per blog setting, any existing posts, with the setting "Don't allow", will not allow comments. To change this, you have to edit each post, one by one, and change the setting. 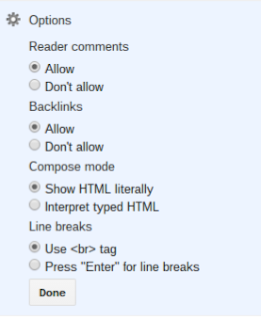 If you occasionally disable comments, check this setting before you publish a new post - and make sure that comments are enabled, when appropriate.

If the setting for a post is currently "Allow", and a post has comments, you'll have 3 options for that post.That's the choices, for each post with comments.

If you're in the habit of changing the comment setting for various posts, you'll want to check the setting, for each new post - and make sure that it's appropriate. Better that, then to have to change a whole bunch of posts, one by one, later.