Put A Notice, To Your Followers, On Your Blog

By Nitecruzr February 01, 2016
Thanks to the Followers rewrite - and the Followers database cleanup - this blog has lost over 500 Followers.

Blogger Support suggests that we should publish a notice to our Followers, letting them know what is going on - and why some might be no longer Following.

The notice, if published as a post, will go out to everybody subscribed to the posts newsfeed.

People who were affected by the Followers cleanup weren't subscribed to the newsfeed, using the Reading List - and did not lose a newsfeed subscription (nor did we lose a subscriber).

If they are subscribed, they will be using a third party newsfeed display - and any third party display won't be affected by the cleanup. Basically, the only thing that your blog (or mine) lost is somebody's photo, on our blogs.

Any ex Follower should see the notice, at the top of the page.

If an ex Follower was subscribed to a blog using a third party newsfeed display, that subscription still exists. If they view the blog, as a normal reader, the notice at the top of the blog should catch their eye. You can do the same, on your blog.

Look at the top of the page, here. Do you see the gadget, directly under the header?

Dear Followers Of This Blog ... 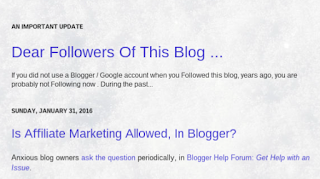 "If you did not use a Blogger / Google account when you Followed this blog, years ago, you are probably not Following now."

I think that says enough.


That is simply a Featured Posts gadget, displaying my post from January 2016, Dear Followers Of This Blog ....

When I installed my Featured Posts gadget, I positioned it at the top of the posts column ("Main"). Having selected "Dear Followers Of This Blog ..." as my Featured Post for the near future (probably the next month or so, anyway), I renamed the gadget to "AN IMPORTANT UPDATE".

And that's all that I had to do. I actually installed the Featured Posts gadget several weeks ago, shortly after Blogger Engineering released it. I had been changing it daily - and showing a different older post, each day.

Until the Followers rewrite is finished, and my "missing" Followers start returning, I'll probably leave that featured post in place.

You can do something similar, with your blog.

You can do something similar with your blog, if you like. Just note, as I did by experimenting, that the post content, as displayed in the gadget, has a limited length. You'll do best with a short and carefully phrased opening sentence.

Oh Yes, I did tweak the gadget Title line!


I'll probably go back to "22px" after this episode is over - but for right now, "28px" makes the title "Dear Followers Of This Blog ..." stand out a bit. Hopefully, some former Followers will see and react.

You could do the same, with a Text gadget, if you wish - though again, using a post puts the notice into the posts newsfeed - as this post will go. I just found the Featured Posts gadget to be the natural medium for an advice to my (former) Followers. As always - YMMV.

Thanks to the #Blogger Followers gadget cleanup / rewrite, this blog (and many others) have lost a significant amount of Followers. It's possible that the people who were dropped may re Follow - if they are aware that they need to so so.

You may notice my advice, at the top of my blog page, "AN IMPORTANT UPDATE". Hopefully, some people who are now not Following will read the advice, either on the blog, or in their newsfeed reader.

Dani said…
Just to let you know your "Important Update" does not appear when this post is read via my cell phone. However, if I change to "View Web Version" it does.
1/2/16 16:10

I'm constantly / still trying to get gadgets enabled, in the "Mobile" template. I may have to hope that my ex Followers all use the "Desktop" template.